Can Honda feel displeased with VW’s entry-level EV concept rival to its ‘e’?

Can Honda feel displeased with VW’s entry-level EV concept rival to its ‘e’?

While ‘errors’ can occur, when new cars are developed on a desktop PC, Iain Robertson believes that some ‘tit-for-tat’ reactions may have been inevitable, when the latest Honda e looks so much like a VW Lupo of 25 years ago, which entitles VW to reflect on the model for the development cycle of its all-new ID.Life entry-level BEV. 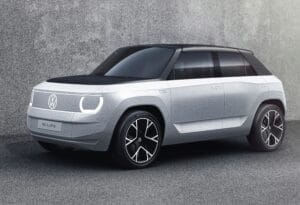 There was a period in the music scene, prior to legitimate sampling becoming such a big earner for original performers and composers, when artists’ lawyers would don their cans and listen out for crass plagiarism, knowing that a pot of gold could lie at the end of that rainbow. All vehicle brands protect their identities ferociously and corporate lawyers earn millions of Dollars from issuing writs worldwide, should there exist even the merest whiff of suspicion about ‘copying’ anything. However, the Chinese motor industry has demonstrated that it knows no bounds on the copycat front, which means that Sino replicas of expensive UK and European models have been appearing that might have a domestic market value markedly lower than in the west…the irony being that the west has been unable to take action in the east…or that most of the western brands have tried desperately to find bedmates in the east and do not like to upset the apple-cart too much.

Yet, when available design and engineering technology is created by known specialists that are few in number, an inevitability grows that copycatting can occur often unwittingly. Mind you, were you to study the flanks of most of the SUV market contenders, telling the difference between one make and the next does prove to be exceptionally difficult. It is a motor industry problem that has remained insurmountable for much of its existence, especially around mainstream and high volume model lines. Yet, the law suits continue to fly around.

Volkswagen’s approach to the electrified vehicle scene started several decades ago and has always been in the forefront of industry developments. While its ‘ID.’ model naming policy is likely to revert to accepted popular nomenclature (Golf, Polo et al) in due course, it wanted to test the water by introducing Passat and Golf sized EVs (ID.4 and ID.3), because they are known models worldwide. Of course, platform size is important to providing a range of battery power outputs…too small and range suffers (until battery development catches up); too large and excess weight affects the overall package. However, even VW has been forced to accept a new raft of parameters, despite its renowned mastery of platform engineering.

Remember that the company is also highly regarded for its compact and sub-compact models…the real ‘people’s cars’ in its extensive range…the affordable ones….because buying into BEVs is not exactly a cost-effective exercise, even though some slight attempts are made by the various carmakers to ease the pains of acquisition. However, even Honda is experiencing difficulties with acceptance of its ‘e’ model, which retails for well over £30,000, around £12-£15,000 more than it ought to be. Before you think I am being anti-BEV, I should state that I am not but that I am a realist and car companies know that even with the relatively high costs associated with electrification, fewer working parts and simpler drivetrains do equate to smaller price tags, which only serves to state that they are all overcharging!

Of course, VW has proposed that its ID.Life could be pricetagged at around Euros20,000, or as close to £20,000 as to scarcely make a difference. It promises an innovative interior, neat, minimalist styling and enough zest to make it enjoyable to drive. However, the consumer is not stupid. An ‘innovative’ interior means recycled plastics, something at which VW is well-practised, but which also equates to a lack of pleasant tactility and a ‘plastic-fantastique’ quality that does not meet hoped for higher standards, regardless of the user’s green halo size. Smaller dimensions overall means cramming in a battery pack with a restricted mileage, which rears the old fears about range anxiety, regardless of insta-torque. It is a model category that is fraught with pitfalls, little wonder that VW concentrated on the larger alternatives firstly.

It is of no surprise that VW tries to sell the concept on the basis of\ communal transport. The only problem is that, while such a proposition might work in a Communist country, like China, where the Englishman’s home is also his castle, it loses value; users do not want to share and why should they? The zestiness mentioned earlier comes from a single electric motor rated at 231bhp, although VW is being exceptionally bullish about its 240mls range and reckoning that it will clock the 0-60mph sprint in around 6.6s. Its flexible interior can turn into a double bed, or feature fully folding front and rear bench seats, while the central screen option can turn the car’s interior into a cramped video house, because that’s what VW’s ‘old’ board believes younger buyers desire most in a car.

It is as well that ID.Life is a concept, because it has a long way to go before reaching production reality.  By the time it reaches that stage, Honda needs to feel no threat, as long as VW can stick to its price intention, which will continue to make things difficult for the Japanese rival. However, I love the idea of an affordable Volkswagen and, as long as some sensible marketing surrounds its introduction, there is no reason why it should not be a superb replacement for the fossil-fuelled up! model range.