The Office of National Statistics (ONS) reported a recovery in UK exports in February 2022 from December 2021, but this was short-lived according to the latest Exporter Monitor by Coriolis Technologies and The Institute of Export & International Trade (IOE&IT).

The outlook for the coming months looks difficult for UK exporters, especially given the current geopolitical situation. Our projections suggest that there could be a mild uptick during May, however, the June and July forecasts show that exporter counts will flat-line at best; at worst, any May growth will be short-lived.

During April, the numbers of small businesses exporting dropped the most steeply – by some 4.31%, while the drop in larger exporters was much smaller at 1.3%. However, in terms of revenues and employees, it is the larger businesses that are showing the greatest decline, of over 4% in revenues and over 6% in employment compared to a year earlier. This is particularly concerning because many smaller businesses rely on the supply chain effects of larger businesses, and if these are falling back, it presents a real challenge to UK originating export supply chains in the future.

xecutive, Dr Rebecca Harding said: “As expected, the uptick in February exports was short-lived replicating the seasonal recovery we expect to see after January lows. However, the extra impact of sanctions following the Russia-Ukraine crisis has further driven down exporter counts, revenues, and employment in April 2022. The concern here is also the negative impact on large firms in terms of revenue and employment which subsequently creates a risk to supply chains and SMEs in particular in the coming months.”

Institute of Export & International Trade director general, Marco Forgione said: “The message is simple, don’t take UK exporters for granted, they rely on their international networks for their trade – and those networks are under severe strain. While the supply chain crisis continues, the Russian invasion of Ukraine adds uncertainty to an already complex trading picture. Relationships are fragile and UK exporters need help, support and guidance to get them through these difficult times. We reiterate our commitment to supporting businesses of all sizes through these turbulent times. Education is an essential tool to ensure UK exporters have the expertise to trade effectively, sustainability and competitively.”

The findings in detail: 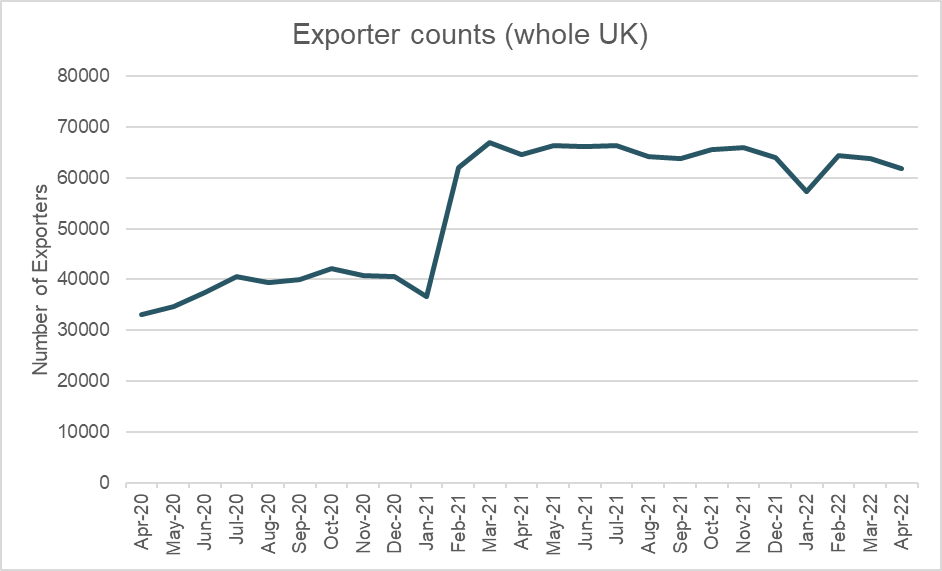 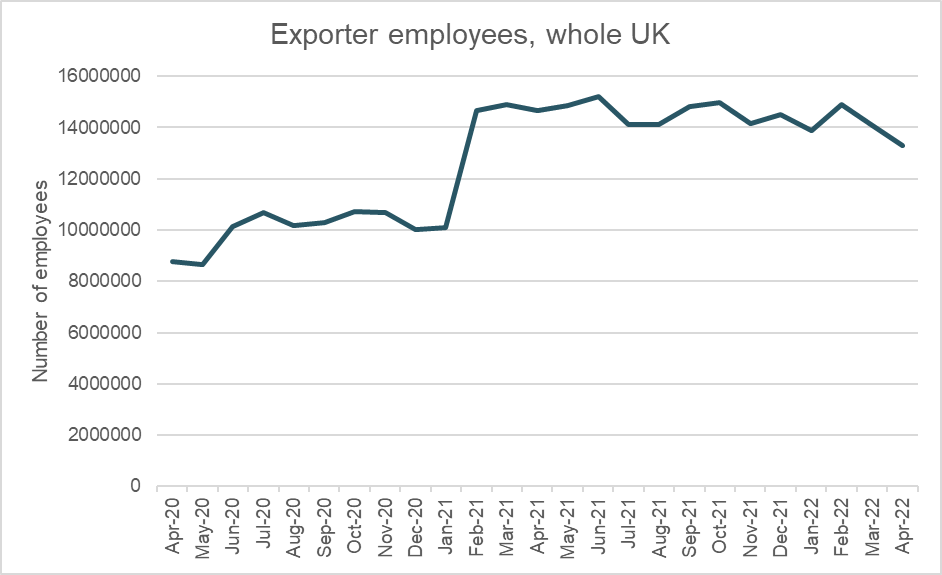 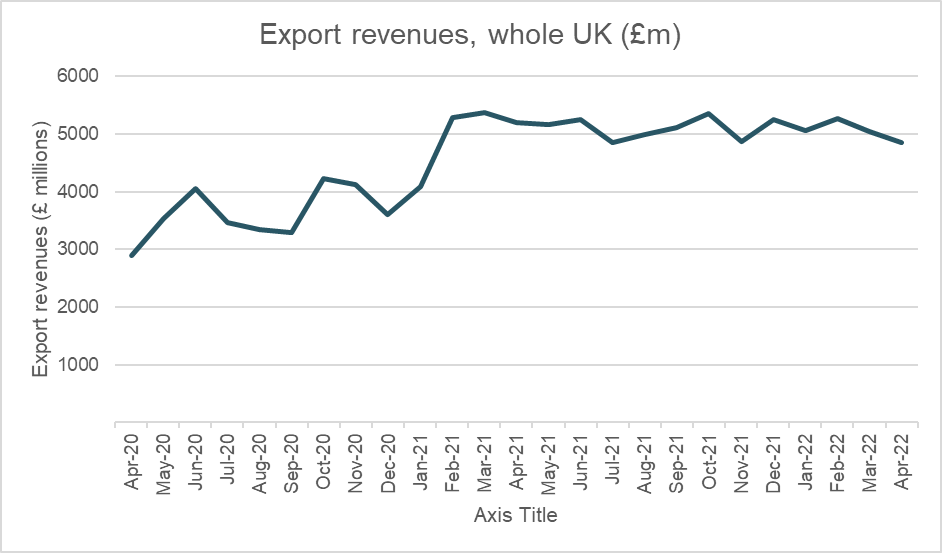 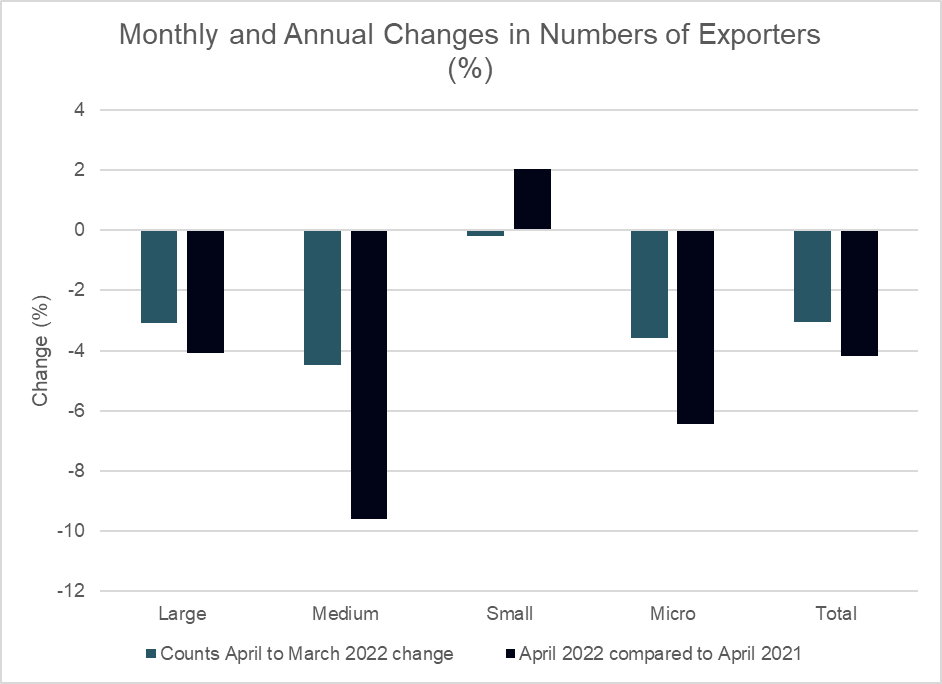 Since March 2022, the overall numbers of large, medium, small and micro exporters has declined by 3.07%, 4.48%, 0.20% and 3.59% respectively. That equates to an overall decline in the numbers of companies exporting of 3.06%. When April 2022 is judged against April 2021, large, medium and micro exporting companies have declined by 4.09%, 9.61% and 6.44%, while small exporters have increase in number by 2.02%. This is an overall decline year on year of 4.17%. It’s clear that medium sized exporters have shown the largest percentage drop, while small exporting companies have grown by the largest percentage. 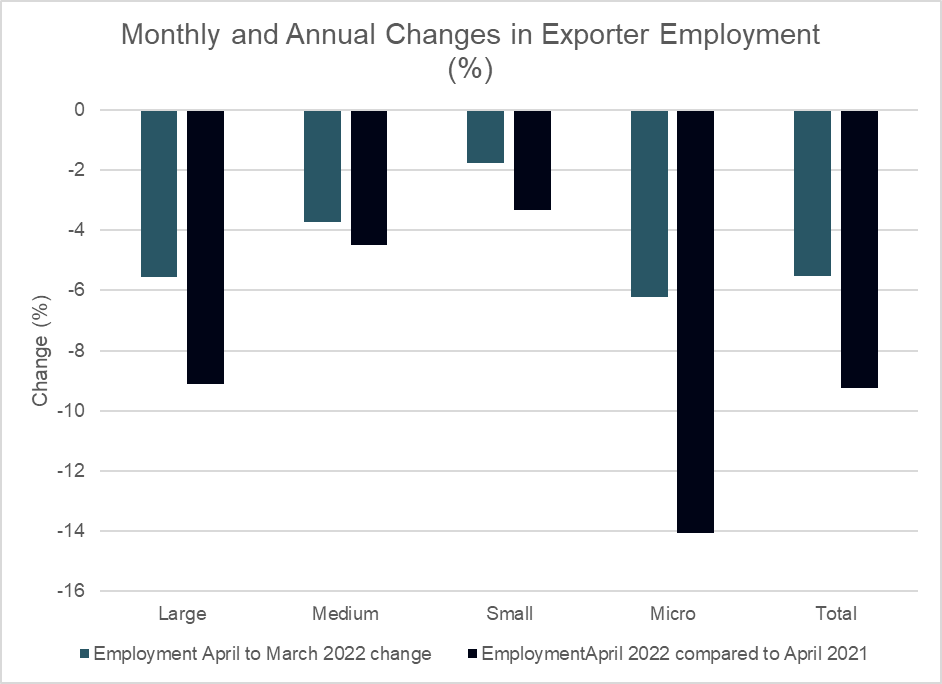 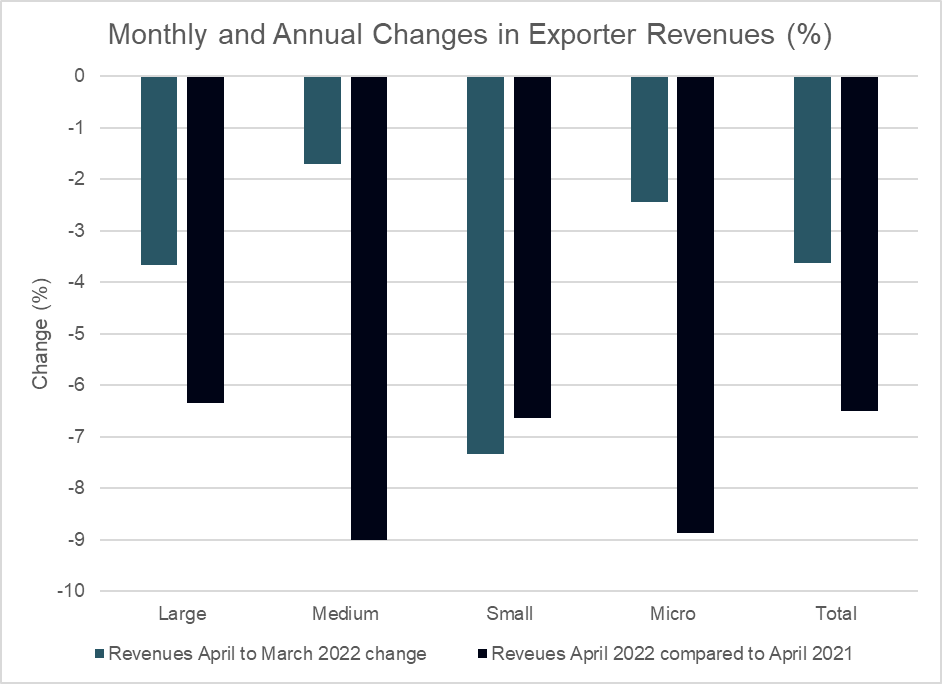 There are downside risks to the forecast that come from the uncertain geopolitical environment at present. Our projections suggest a mild uptick during May, this is within a margin of error and our June and July forecasts at best suggest that the growth in exporter counts will flat-line and at worst that any growth is short-lived.