A new poll conducted by the Institute of Export & International Trade (IOE&IT) as part of their latest webinar series found that over half (54%) of the 400 delegates reported feeling very (11%) or quite (43%) optimistic about their business’ prospects for international growth in 2023.

The webinar was the second in The Exporting Starter Pack Voucher scheme, a charitable initiative of six free webinars being run by IOE&IT to help promote international trade and equip more businesses with everything they need to sell and send goods overseas.

A further 30% reported feeling neutral about next year’s prospects, while only 16% said they were quite (12%) or very (4%) pessimistic. 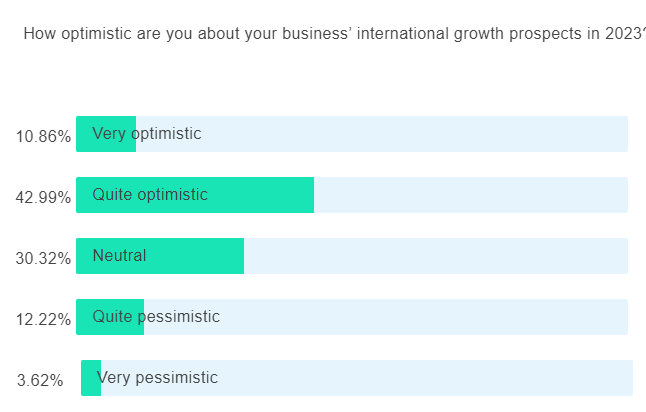 Marco Forgione, director general of the IOE&IT said: “It’s clear from this latest survey that businesses which invest the time both to understand the needs of the market and to seek out relevant training and expert consultancy on trading internationally have a very different view of their business opportunities next year. So although there are undoubtedly a number of serious challenges facing businesses, it is significant that those who engage with international trade education have a much more positive view of their growth potential.”

Asked about recent currency fluctuations, 45% reported having been negatively impacted by the dramatic shifts in the value of the pound over the last three months, with just 8% reporting it had had a positive impact.

Perhaps reflecting the nature of those swings, over a third (36%) said they weren’t sure what the impact had been, while 11% said they hadn’t felt any impact.

When questioned about the impact of the recent Autumn Statement, over half (57%) of delegates said they expected the announcements made to have no impact on their business. Matt Vick, an expert on international trade and a panellist on the webinar, explained this was probably partly by design:

“After the disastrous reaction to the previous mini-budget, a minimal, calm reaction – having little or no impact – is probably not a bad an outcome for the chancellor and the government.”

More alarming for the chancellor was the fact that a third of delegates (31%) felt the announcements would have quite a negative impact (29%) or a very negative (2%) impact on their business. This compared to just 12% who felt the impact would be positive.

There may be trouble ahead

While delegates they did see some challenges ahead in 2023.

For just over a fifth (21%) the energy crisis was the biggest cause for concern, while for 38% it was uncertainty in international markets.

Almost a third stated that post-Brexit rules for trading with the EU would be their biggest business challenge next year. 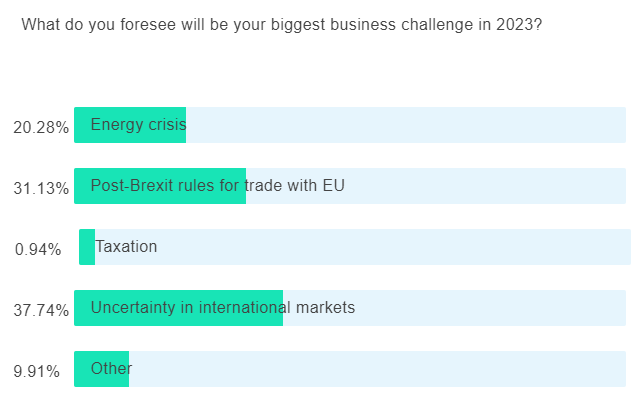 This was supported by a further poll in which, when asked about barriers to trade 80% picked either administrative barriers (27%) or complexity of rules (53%).

The Exporting Starter Pack Voucher scheme continues tomorrow with the first of two webinars looking at Customs Procedures and Documentation.