Responding to the latest ONS jobs figures, which show 3.010m jobs in retail, down 22,000 year-on-year, Helen Dickinson, chief executive of the British Retail Consortium, said: “The UK retail industry saw a decline in the retail workforce in Q3, with 22,000 fewer jobs than the same time in 2020. This figure also includes around 97,000 workers who were still on furlough at the time. The fall in jobs reflects the decline in staffing at large city centre retailers, who cut back in response to lower shopper numbers during the pandemic. Nonetheless, there are still new retail roles being created in areas such as logistics and online fulfilment, not all of which are captured under the ONS retail job figures.

“There were 91,000 retail vacancies in October, and nearly 1.2 million across the whole economy. Given the large number of people employed in retail, this has contributed to pay in retail rising 5.5% in 2021, double the national average across all industries. This has created additional costs for retailers, which on top of the rising transport costs and higher energy and commodity prices, are filtering through to higher prices for consumers.

“The retail industry has been ramping up operations ahead of Christmas, which should mean a rise in the number of jobs in Q4 2021 compared to today’s Q3 figures. However, these efforts are being challenged by labour shortages in HGV drivers and warehouse workers. Only the gargantuan effort being made by people working in retail and its supply chains is ensuring a successful and festive Christmas for families all over the UK.

“Retailers continue to invest in their workforce, however the government must redouble its efforts in the new year to find a more flexible, demand-led immigration system and broader usage opportunities for the Apprenticeship Levy to ensure the industry continues delivering on its mission of a higher skilled, more productive, and better paid workforce.” 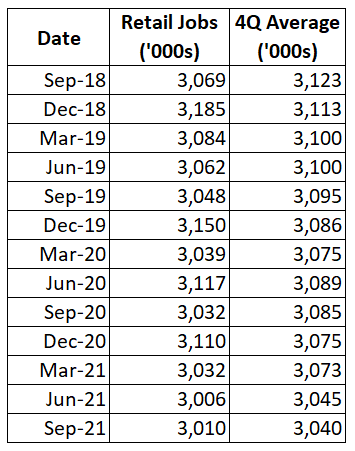